Note to DNC: Stop Blaming Putin, YOU Wrote the Emails

“Nobody cares about your damned emails!”  – Well they do now.

“For those who find themselves in opposition to Democrats, the last couple of days have been hysterical. Despite the dysfunction on display last week at the Republican National Convention, it’s clear that the GOP has nothing on the Democrats.

Democrats immediately went on the offensive, blaming Russians for the DNC email hack and claiming Putin’s government is trying to influence American politics. While that may or may not be true (hard information on who is at fault is still unavailable), none of that has anything to do with the fact that it was Democrats who wrote the damning emails.

However, it doesn’t change the fact that the emails are the result of a hack — not a fabrication. Democrats wrote every email being thrown back at them. There’s a reason Debbie Wasserman-Schultz resigned, after all. It wasn’t because someone made something up, it’s because those emails are real.

Republicans, Libertarians, and even Bernie Sanders supporters are having a field day with the WikiLeaks information. It turns out almost everything they accused Democratic Party elites of doing has been proven true. From anti-Semitism from a Democratic member of the House who should know better, to referring to Latino voters as “taco bowls outreach,” we see that the party of tolerance is far less tolerant than they appear.

None of this can be laid at the feet of Putin. While he may have been behind the hack, he wasn’t behind the real problem: the corrupt and prejudicial individuals who wrote them being so highly placed within the party.

No, Democrats, that’s all on you.”

Game- Set- Match!
Hillary gets played!… And not by Bill this time…

Republican Donald Trump held a press conference Wednesday morning to respond to the recent attacks and lies by Democrats and the liberal press.

Trump spoke directly to the Russians during his question and answer session. Trump urged the Russians to release more hacked Hillary emails.

“I will tell you this, Russia if you’re listening, I hope you’re able to find the 30,000 emails that are missing. I think you will probably be rewarded mightily by our press.”

After his presser the Hillary Campaign released a statement.

The campaign admitted for the first time that Hillary Clinton’s emails were a national security issue.
Via The Federalist: 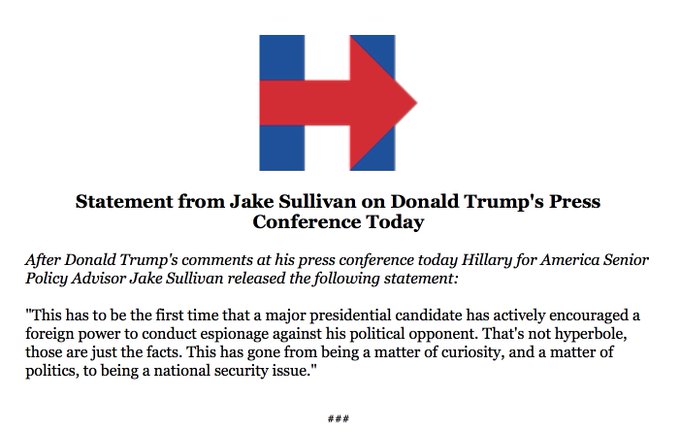 ….Continue reading @ theGatewayPundit
– To the point: No one has asked a foreign power to engage in espionage. The invitation was proffered by a stunning lack of  security by Hillary Clinton and the DNC. Nothing left to hack. The Russians and Chinese probably have all the emails. Hillary’s worst nightmare. But if she could not foresee this, how will she deal with other international risks that are not readily apparent?/CJ